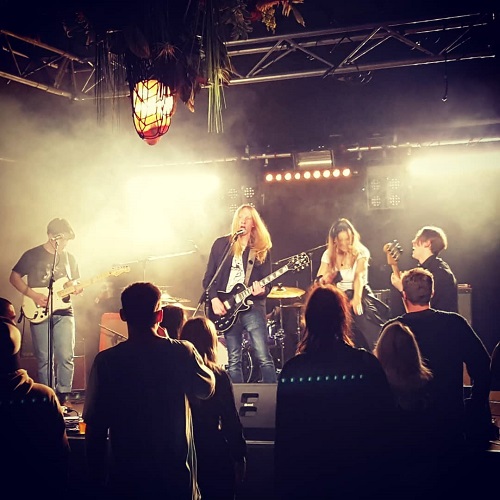 Fresh from a packed-out gig at the Workers Club Geelong supporting Southern River Band on their east coast tour, a full house at The Loft Warrnambool and a massive home town show in Apollo Bay, The Refuge’s well-honed, new material continues to win fans. Having played over 100 gigs in 4 years by the age of 18, the band recently won the Queenscliff Music Festival Emerging Artists grant, which they used to record their second studio album, due for release in late 2018. Their new album, produced by Scott Wilson and Neil Gray from Big Sky studio who worked on Dan Sultan, Chris Cheney (Living End) and Vasco Era, contains ten tracks that combine various genres within each song adding to their energetic rock sound. The band exploded onto the Queenscliff Music Festival stage leaving plenty of new fans blown away. The Refuge were recently ranked 3rd on the bands to watch list after King Gizzard and the Lizard Wizard and Rolling Blackouts by the Weekly Review.
The Refuge’s signature sound is emitted through their stellar stage presence, which is powerful vocals, staggering guitar riffs, explosive drumming and killer bass playing.